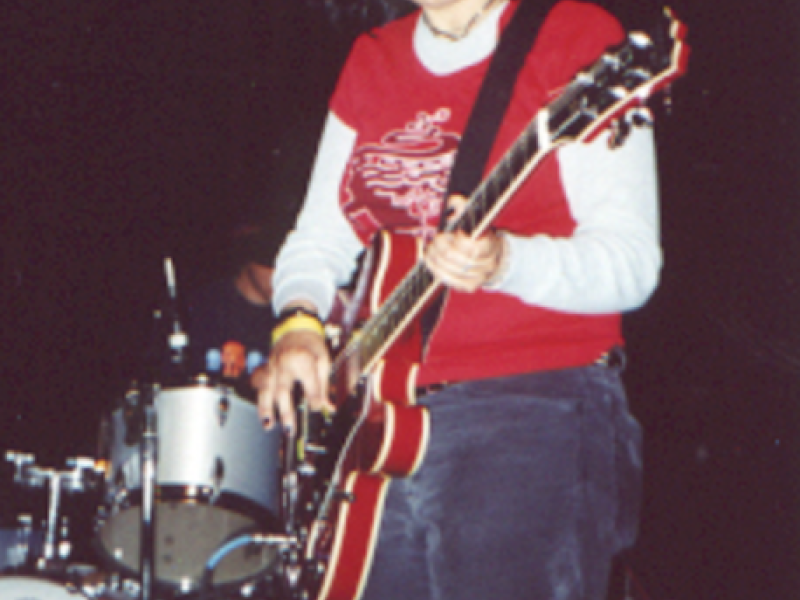 Abstract
Fais Do Do was an East. L.A. music venue that hosted the final night of Scutterfest 2002, a music festival formed out of the punk rock queer zine Scutter. Scutter was self-published by Chicano queer and Los Angeles native Rudy Bleu, who formed the magazine to create a relatable space for other queer people of the punk rock scene.
Content

"One-two-three-four, Leave your gender at the door!" chanted L.A. queercore band Radical Cheerleaders at East L.A. music venue Fais Do Do, which had been transformed into a punk rock version of West Hollywood's Gay Pride Festival on the last night of Scutterfest 2002. Scutter, which inspired the genesis of a full fledged music festival, was a very personal self-published magazine by 1st generation Los Angeles born and raised Chicano Queer Rudy Bleu. In a 2002 interview with Bret Berg, Rudy Bleu expresses the motivations for creating Scutter: “Everything I saw as gay was nothing I thought I could relate to or connect to. Everything was about looking your best and what kind of clothes you were wearing and what kind of body you had. I started writing all these rants about how it wasn’t cool to be queer or punk unless someone thought you were sexy as a fetish. It wasn’t cool to be fat because it meant you were ugly.” Like queercore, the zine Scutter came about because someone felt like the punk scene inadequately represented and often opposed queer culture and values. Despite its intention to be an inclusive space to social deviants, the punk scene that existed before queercore’s integration was indeed often inhospitable to queer folks.

Taking place over the course of 4 days in June of 2002 at various locations across Los Angeles, the music festival Scutterfest was an important moment for queercore. It was not just a place for musicians with similar sounds and goals to come together, but also a safe space for fans who’d otherwise feel rejected by punk audiences. The first installment of the 2002 Scutterfest took place on Friday June 15th at the all-ages, alcohol and drug-free, punk rock/noise/experimental venue The Smell in Downtown LA. The show featured performances by LA based queercore bands Best Revenge (Ryan Revenge and KT, signed to Spitshine Records), Hillside Village, Low Budget, Nick Name and the Normals, Radio Vago, Rotophone, and Third Grade Teacher. Attached below are some of the images from these performances taken by Simone Fujita and Adrienne Pearson. Other venues that hosted the 2002 Scutterfest include Fais Do Do, Luna Sol Cafe, and Mr. T’s Bowl. Also featured was Dangerous, Deadlee, Exhibition, the Infinite X's, Loudboy. the Mollybolts, The Pinkz, Radical Cheerleaders, Rizzo, $3 Puta, Subtonix, Rocio Carlos, Patricia Garcia, Ramon Garcia, Jackie Joice, Larry-bob, Aimee Lay, Nick Leonard, Kevin Ridel and the AM Radio, Rollo Greb, Lito Sandoval, Cecil Seasku, Los Super Elegantes, Ozma, Pansy Division, The Patience Book, Patsy, Slow, The Kids of Widney High, U S A sexual, and Alan Wiley, as well as films by Martin Sorrondeguy, Bruce La Bruce, Jackie Joice, Tracy and the Plastics, Olivia Parriot, and Irwin.