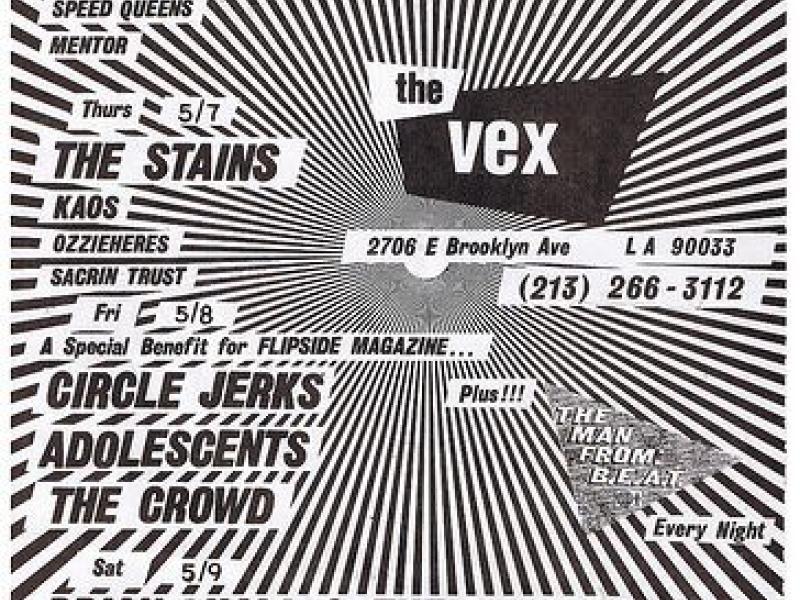 Abstract
Vex is a venue famous for being a hotspot for Latinx members of the punk scene, particularly during the Chicano punk movement of the late 1970s. Queercore, not exactly a subgenre of punk, but rather a divergent response to the sexism and homophobia of the punk scene, sought to not only dismantle these prejudices amidst the punk scene but also speak out against the growing conservatism of the gay and lesbian mainstream.
Content

While bands like X and an early version of The Go-Gos frequented Hollywood's Masque club, the Chicano punk rock scene of East L.A. revolved around the Vex. Teresa Covarruvias (from the band The Brats) and Alice Armendáriz (of The Bags) rented out the second floor of Self Help Graphics and turned it into Vex, East L.A. punk central. Vex was like a second home to many punk kids that were rejected by their family for being punk, and also rejected by the punks for being Latino.

In a 1999 documentary entitled Mas alla de los Gritos (Beyond the Screams), director Martin Sorrondeguy (lead singer of hardcore punk band Los Crudos, queercore group Limp Wrist and founder of Lengua Armada Discos record label) demonstrates the Chicano punk movement that exploded in East Los Angeles in the late 70’s. The Vex played a major role in the movement and provided a space for many Latinx/Chicanx punk bands to play. Some of the most popular bands of the times were: The Plugz, The Bags, The Brat, The Zeros, Felix and the Catz, Stains, Los Angelinos. Much of the music coming from some of these Latinx/Chicanx punk bands reflected the transnational and local struggles affecting their communities, creating a kind of departure from conventional punk rock music. These stuggles included discrimination and police brutality in the barrio, as well as the need to raise awareness of border and citizenship/residency issues. In California, in particular, opposition to Governor Pete Wilson’s Prop 187 was a major focus of the scene in the 90s.

In fall 2012, the Vex was reincarnated in a new location, but continues to be run by founder Joe Vex.