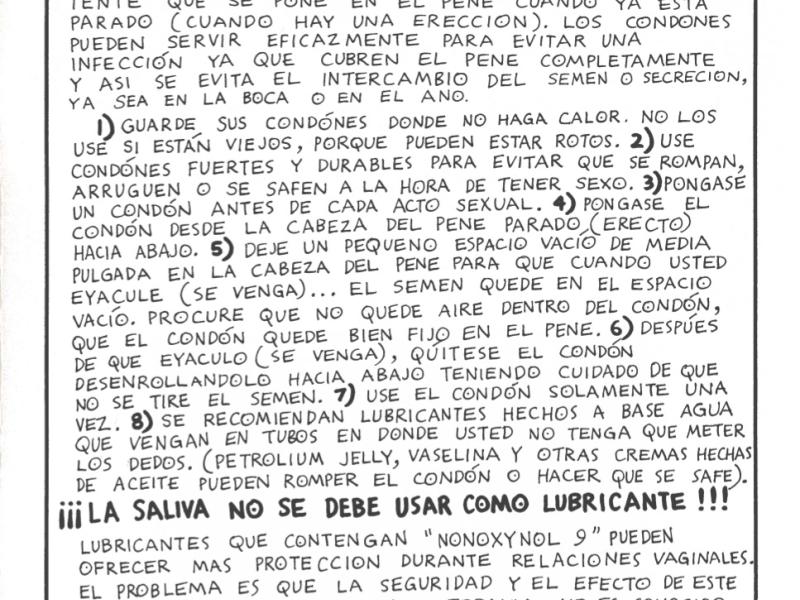 Abstract
Chicos Modernos was a Spanish-written comic series emphasizing the importance of practicing safe sex. Illustrated by Joey Terrill, author of queer Chicano publication Homeboy Beautiful, the comic was published between 1989 and 1992 by The CORE Program funded by the L.A. County Dept. of Health Services. The comic promoted and spread knowledge about safe sex during the A.I.D.S. pandemic, such as who was at risk of infection and how to take safety measures-- all while maintaining culturally-relevant comic elements. This information was extremely useful given the time frame and targeted demographic. Moreover, the comics were published solely in Spanish during the height of the A.I.D.S. pandemic-- a time in which Hispanic communities lost thousands due to the virus. Chicos Modernos became not only a source of entertainment, but an indirect health resource. The address listed belonged to The CORE Program, 1990's.
Content

Chicos Modernos was a free Spanish-written comic illustrated by Homeboy Beautiful’s Joey Terrill, a queer Chicano artist. This comic series focused on promoting stigma of safe sex, information on the S.I.D.A. (A.I.D.S.) pandemic, and served as a resource to its readers. The free comic series was available to Chicanos at risk of infection who may have otherwise not found accessible information relating to the virus.

Chicos Modernos translates to “Modern Boys”, suggesting a new or modern Chicano attitude relating to homosexuality. In the religious-influenced culture, homosexuality was not widely accepted due to tradition. Hispanic society expected and encouraged men to perform machismo/machiste -- a display of exaggerated manhood characterized by aggression, seriousness, and physical strength. In the Chicano patriarchal family dynamic, men were depended on to marry women and continue the family name or legacy. Deviating from this standard and expressing one’s homosexuality was generally unacceptable on a family and a community level. Pressure at home paired with external issues (racial discrimination, poverty, gentrification of los barrios — Spanish-speaking neighborhoods, and gang violence) left a number of Chicanos and other Hispanics displaced within their community, leading to rising rates of prostitution and drug abuse.

The comic series addresses the state of S.I.D.A. (A.I.D.S.), who can be at risk, and how to protect oneself. By the same token, Chicos Modernos includes how to support one’s friends or family throughout the process of getting tested and mapping treatment options. For example, multiple pages throughout Terrill’s illustrated editions contain descriptions such as (translated) “An exam is to determine the presence of A.I.D.S. antibodies, it is not an exam ‘for’ A.I.D.S. A positive result indicates you are infected by the virus and can transmit to other people…” (Terrill, Vol II. P. 15). Similarly, (translated) “How to Use a Condom: … Do not use if they’re old, they may be broken. Use strong and durable ones to avoid tears/breaks…” (Terrill, Vol. III. P.21).

Such information was not previously widely accessible to Hispanic communities, as homosexuality was not discussed-- especially if one was infected by the virus. Individuals, particularly those living on the street, were unaware of risks and how to keep themselves protected. By producing a free comic series in Spanish, Joey Terrill and The CORE Program provided information to those at risk of contracting A.I.D.S. or H.I.V. through a relatable, informal, and entertaining platform.