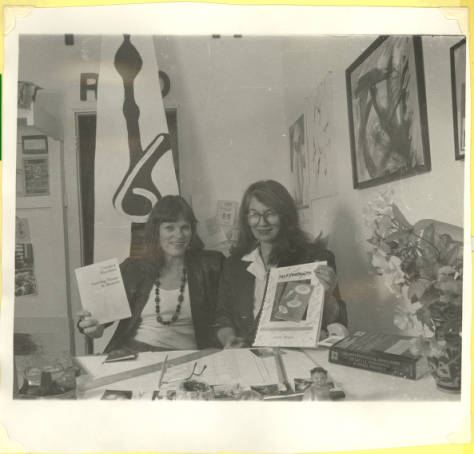 Clothespin Fever Press was a small publisher established in 1985 with a focus on lesbian literature. Jenny Wrenn and Carolyn Weathers co-founded the press in Los Angeles, where they had both been working on their art and writing respectively. The idea for the press came from Wrenn’s desire to publish Weathers’ memoir, Leaving Texas, after she heard Weathers read it at a bookstore. The name of the press came from a recent art piece by Wrenn, White Clothespin, a book covered in clothespins, nails and more.

From the beginning, the goal of the press was to publish lesbian writers. They did not place on restrictions on what genre or style of work they published. In an article on the press, they explain their publication philosophy: “Our approach is eclectic: Lesbians are here in this world, a part of it, and can write about anything and everything” (Wrenn 33). They published over twenty books, ranging from memoirs to poetry to anthologies.

Their first book, Leaving Texas, was printed by hand at the Los Angeles Women’s Building. It sold out its first printing when it was released in 1986. As the press published more works, their profile grew within Los Angeles and the lesbian community there. In a Different Light: An Anthology of Lesbian Writers, the press’s third book, became a finalist for the 1990 American Library Association’s Gay and Lesbian Book Award. In 1993, Loss of the Ground-Note: Women Writing about the Loss of Their Mothers was honored by the Women’s Caucus of the Popular Culture Association and the American Culture Association with the Susan Koppelman honorable Mention Award.

Wrenn and Weathers ran the press out of their offices at 5529 N. Figueroa St. in Los Angeles. They soon moved from the handmade production of their first books to printing with book manufacturers and using traditional distributors to get their books into libraries and bookstores across the United States. The press later moved to San Diego, California before closing in 1996. During its run, Clothespin Fever Press carried forward its founders goals of uplifting the voices of lesbians writers across broad genres, subjects, and styles, working to get their books to as wide an audience as possible.