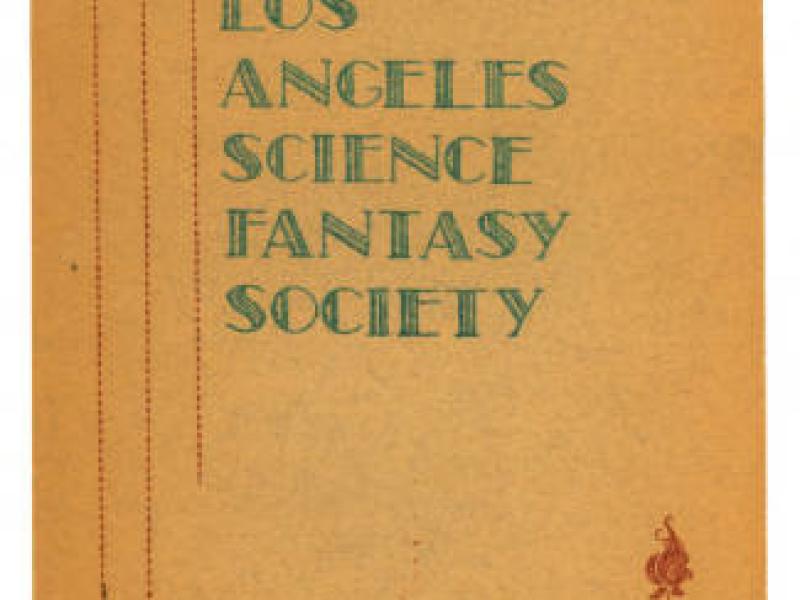 Abstract
The Los Angeles Science Fantasy Society (LASFS) was created in 1934. In his Memoirs of a Superfluous Fan, T. Bruce Yerke writes that the LASFS used to be the LASFL, or Los Angeles Chapter Number 4, of the Science Fiction League. This club for fans of all things science-fiction and fantasy gathered a number of people of interest that eventually became hallmark figures in the science-fiction and LGBT publishing subcultures.
Content

Notable members of the Los Angeles Science Fantasy Society (LASFS) include the following: Forrest J. Ackerman, who gathered thousands of pieces of memorabilia from various science-fiction and horror films in his house, the Ackermansion, while also sometimes writing original stories as his lesbian alter-ego, Laurajean Ermayne. His good friend and former partner Myrtle Douglas, also known by her Esperanto name, Morojo, was also dubbed the “Mother of Cosplay” for creating the very first example of it for the First World Science Fiction Convention in New York. James Kepner was also a prominent member of the club who later in life wrote for ONE Magazine, his research efforts eventually forming the nasence of the ONE Archives. Finally, Edythe Eyde, also known as Lisa Ben, or Tigrina the Devil Doll in the Science-fiction world, also made her first steps in the LASFS with a mimeograph, before moving on to her own publication of the first lesbian magazine, Vice Versa. In the article cited here, names such as those of T. Bruce Yerke or Francis T. Laney will also be mentioned, as they both gave information and criticism about the society itself despite never reaching the same posterity as the aforementioned figures.

Closely linked to the main clubhouse of the LASFS at 637 ½ South Bixel Street was 628 South Bixel Street. Laney indicates that “Brown and Kepner [lived] across the street at 628” (Laney, 42). In fact, the 628, beyond being the residence of Mel Brown and Jim Kepner, was also a sort of secondary meeting place for the members of the LASFS.

Laney recalls that following the 1943 “L’Affaire Degler," during which a man named Claude Degler joined the LASFS over the summer to advertise his “Cosmic Circle” before leaving amidst many controversies and protestations (Yerke, Report), Kepner had kept Degler’s personal effects in his own closet, and both Laney and Kepner had to dig through them to know exactly which personal effects to send back to him. The LASFS’s great sense of inclusivity was also a major factor in why it had so many detractors. To quote Laney:

“This sad lesson in the Facts of Fan Life was sharply pointed up by the parade of homosexuals constantly being dredged up in Pershing Square and brought around the club by one of the residents at 628. […] one of the most active members of the club was also its most vocal homosexual, and that he was continually bringing other fags around the club.”

The person that Laney seems to vaguely identify is most likely Jim Kepner, who is described in the issue 17 of Shangri-L’affaire as “that intrepid explorer, Jimmie Kepner, who is familiar with the wilds of the [Pershing] square.” (Crozetti, Aug. 1944)

Additionally, Laney gives several pieces of information showing both the link between 628 South Bixel Street and the LASFS, as well as the fact that gay men would often be found there:

“Also during the post-club pre-Outsider interregnum I had a most amusing brush with one of the club queers, a character who from sponging off one of the residents at 628 had taken to hanging around the club.” (Laney, 69)

“In her column in SHANGRI L'AFFAIRES Lora Crozetti very aptly took to describing the rooming house at 628 South Bixel as the “Bixel Fairy Palace”. (From November 1943 until now — April 1947 — this building has always had at least one, and sometimes as many as four, members of the LASFS who were also actively overt homosexuals).” (Laney, 92)

It is unclear which Lora Crozetti article Laney is referring to in this last quote, as there is no such comparison in the columns she wrote in Shangri-L’affaire. Regardless, his comment on the nickname in itself gives his own impression of the place, and more details about its frequentation.