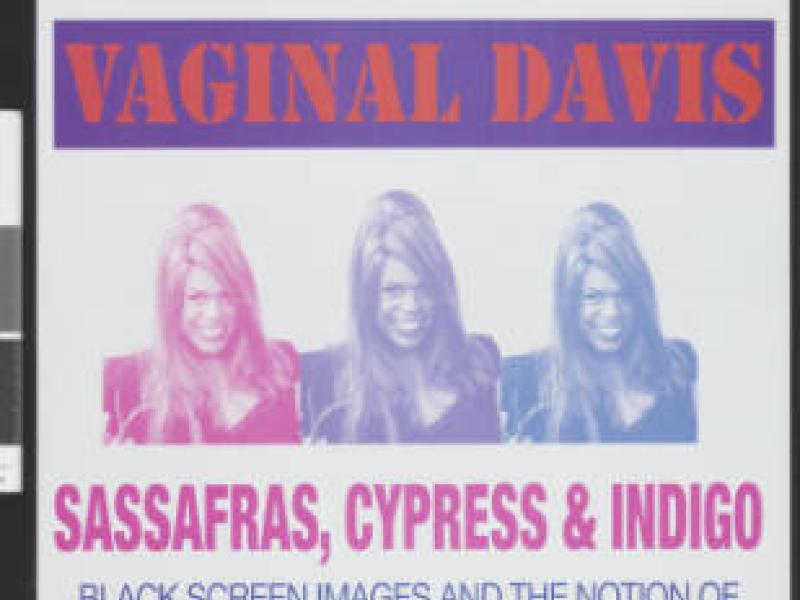 Abstract
Vaginal “Creme” Davis is a black genderqueer drag queen and performance artist who became largely popular and recognizable for performing at various clubs in the Los Angeles underground performance scene. She created and performed with many different bands including Pedro Muriel and Esther, Cholia! The Female Menudo, black fag, and the Afro Sisters. Later in her artistic career, Vaginal Davis hosted Platinum Oasis, a queer performance and art installation festival installed in the Coral Sands Motel. Her work is meant to be a loud, unapologetic, celebration of uniqueness that encourages creative expression in members of LGBTQ+, black and Hispanic, and underprivileged communities.
Content

Vaginal “Creme” Davis was born on February 23, 1969 as Kayle Hilliard. Hilliard lived in an underprivileged community, but despite their circumstances, they managed to go on to be the first of their family to attend college. Their passion for punk music began to take shape as they were introduced by friends to the Los Angeles undergorund scene, where they learned a lot of the musical background that would later become the basis for their career. As they grew into a young adult, they began their career as a writer and poet, accumulating experience within the Los Angeles poetry circuit, including such meccas as CASH and Beyond Baroque.

Using their poetry experience to create lyrics, Hilliar created many performance groups including Pedro Muriel and Esther, Cholia! The Female Menudo, black fag, and the Afro Sisters — the latter of which gave life to their alter ego and drag persona, Vaginal “Creme” Davis. In the October 1988 issue of The Advocate magazine, it was quoted that Davis only truly felt freedom and complete expression, “when I become Vaginal”.

Afro Sisters caught much attention from the public. Vaginal Davis was the lead singer, backed by her sisters, Clitoris Turner, Pussi Washington, Fertile La Toyah Jackson, and temporary member Urethra Franklin. It was hard to miss them, the black, tall, and charming Vaginal Davis in her blond afro, followed by her white sisters with black afros as a sharp but intentional contrast. They were unapologetic and Davis is quoted with, “Onstage I tell my sister Clitoris, ‘Say it loud, I’m black and I’m proud!’ then I say to my other sister, Urethra, ‘Say it, sister,’ and she repeats it… then I turn to the audience and point to the microphone at these rich kids from Malibu and they say, ‘I’m black and I’m proud,’” (Bus Thomas Papers Coll2017-012 Box 1). Under the mischievous laughter, there is a political implication created by the irony of the rich, white crowd repeating after her a phrase that is historically defiant against black oppression. Davis explains, “We basically take bad taste and turn it into a high art."

In 2002, Vaginal Davis took on a project called Platinum Oasis, a special two-day event branching from the Los Angeles gay and lesbian film festival called Outfest. Held at the infamously “sleazy” motel, Coral Sands, each room was dedicated to a performance or art installation by gay artists and allies alike with few rules or requirements aside from engaging the audience however and wherever possible. The result was a crazy, chaotic, exciting explosion of creativity, sex, and queer politics. Walking down the hallways, one might find a room of people wearing adult-sized diapers, loud punk performance in the room to the right, a bloody “murder” scene in the room to the left, and a poolside fashion show outside. “I like to bring together lowlifes and highlifes” Davis said when asked about Platinum Oasis in the July 23, 2002 issue of The Advocate and sure enough “[q]ueers, anarchists, artists, debutantes and Davis’s favorite ‘Lowlifes’ all bonded for a day and a night under the sun and stars” (The Advocate, July 23, 2002, p. 63).

Currently, Vaginal Davis lives in Germany and still actively participates in events and lectures when she’s called for it. “I’m always serious but with humor,” Davis explains in the interview with The Advocate (October 1988). “I’m sexually and socially political because I’m highly aware of the realities of these things. But I don’t want to be soapboxing. I know that the best way to change people is to reach them and the best way to reach them is with humor”.