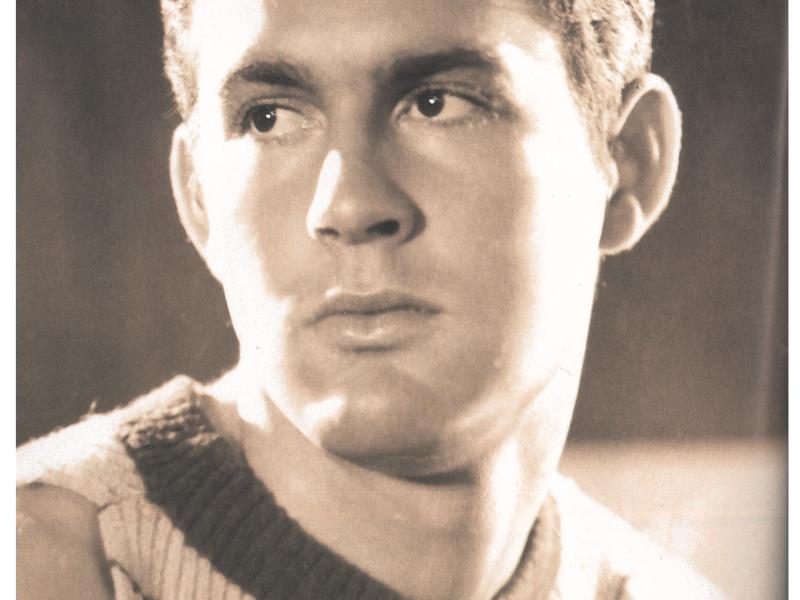 Abstract
Robert Henry Mizer (Bob) Mizer was born on March 27, 1922, in Hailey, Idaho. Known for his stellar skills in photography, he produced Physique Pictorial. In 1945, Mizer experienced a pivotal achievement in his career: the creation of the Athletic Model Guild, his studio space where the magic of his photography came to life.  His photographic works altered the course of the gay rights movement by encouraging individuals to participate in gay pride and to strive for profound change.
Content

Early in his life, Bob Mizer lived in Idaho. At the age of five, in 1927, Mizer, his brother, and his mother moved to Los Angeles, where his mother transformed their home into a functioning rooming house. Evidenced by Mizer’s diary entries during his teenage years, Mizer discussed his homosexuality but could not openly express it due in part to his conservative mother. As a result, Mizer lived a life of secrecy, one that was defined by his “nude sunbathing sessions” and periodic interactions with his models, involving “mutual masturbation or oral sex” (Hanson 7). Due in part to his concealment of his business, his early years were marked by lots of creativity and little publicity. His diary highlighted his struggle to live a dual identity: publicly as a heterosexual teenager and privately as a homosexual one. In addition, at roughly 18 years of age, Mizer was interested in astrological glyphs and manipulated existing symbols to match specific personalities. It is noted that Mizer had a close bond with his mother. The concealment of his true sexuality could stand as a reason why he did not gain attributable fame until later in his life, following his mother’s death on September 22, 1964.

Moreover, Mizer gained a mentorship opportunity with Frederic Kovert in 1942. Kovert was recognized as both a drag-queen, silent film actor and photographer with interest in the category of physique photographs. In addition, Kovert was the owner of a photography studio on Hollywood’s Melrose Avenue. Working with Kovert in the early years had a dramatic impact on Mizer's later booming career. 1945 was quite a significant year for Mizer as he established his AMG studio in the living room of his home. According to Mizer and Henry’s Athletic Model Guild Physique Photographs, Mizer was extremely open about his sexuality with the models he photographed (185).

Mizer was most notably recognized for his contributions to the field of photography by the images circulated in Physique Pictorial. Prior to the popularity of Physique Pictorial, Mizer released one issue of the Physique Photo News in 1951. Later that year, Mizer replaced Physique Photo News with Physique Pictorial. Unlike many other photographers at the time, Mizer experimented with color photography and produced his original color photographs roughly around the mid-‘40s. Mizer’s identity as a photographer was rooted in his color photographs of partially nude men. The primary setting for most of his photographs was his AMG studio, but he also spent ample time photographing models at Muscle Beach in Santa Monica. Walking into one of Mizer’s photoshoots, an observer could expect to view models dressed in posing straps, posing in front of elaborate backdrops, such as prairies. Also, models were often instructed to oil their bodies and play the roles of “sailors and wrestlers and cowboys” (Wenger).

In 1964, Mizer’s AMG studio started housing models. Mizer utilized his skills as a lighting connoisseur to the test by crafting an idyllic shooting area for his models in his studio. When crafting his ideal photographs, Mizer employed a diverse group of models, including bodybuilders, beach bums, college-aged individuals, and military personnel who returned back to the United States after being active in the service. Mizer’s work was extraordinarily radical as he utilized “physical fitness as a tool of survival in perniciously polite society” (Wenger). While Mizer’s first issues of Physique Pictorial contained partially nude photography, it was not until January 1969 that the first entirely nude issue of Physique Pictorial was published.

Mizer’s photographs in Physique Pictorial provided more than just a source of entertainment for individuals, but also helped increase awareness in the gay community with regards to the emergence of a gay liberation movement. The original issues of Physique Pictorial were sold at the corner of Hollywood and Cahuenga, an area notably recognized as having a sizeable homosexual presence. In order to promote his works to the general public, Mizer printed and circulated bulletins which consisted of both solo photographs and dual photographs (Crable). Prior to the distribution of these bulletins, Mizer was arrested in 1947 for distributing obscene mailing materials and received a six-month sentence at Saugus Prison Farm. In fact, the censorship of mail around the late ‘50s and early ‘60s made it illegal for the circulation of "obscene" contents. According to The Politics of 1960s Gay Consumer Culture, “4,979 arrests and 4,095 convictions for ‘obscene mail’” occurred in the years between 1961 and 1968. Interestingly, Mizer appeals to his bulletin readers by alerting them that there is no presence of nude photography within his bulletin. Mizer was also given a 6-month prison sentence in 1947 for taking photos of a minor who was nude. Similar to ONE Magazine, Mizer catered to the individual needs of his dedicated readers by responding to their questions via handwritten mail correspondence. With this in mind, one may conclude that Mizer worked to cultivate a sense of community and helped to impact the lives of lonely homosexuals.

In 1992, Bob Mizer went into cardiac arrest and died at the age of 70 in Los Angeles. According to the Bob Mizer Foundation, Mizer photographed more than “10,000 models, created over 2,000,000 images, and produced 3,000 short films.” While he is most well-known for his photography capabilities, he also worked as film director and producer. Some of his notable films include 42nd  Street Hood (1957), 1970 Hot Summer Special (1970), and Billy Boy (1970). His enduring legacy has impacted the lives of many. In 1998, the filmmaker Thom Fitzgerald produced Beefcake, a film that analyzed the life of Mizer and his astounding efforts as a photographer and publisher of Physique Pictorial.  His ambition and hard work have influenced many other artists including Robert Mapplethorpe and David Hockney. His hard work is evidenced in the fact that he continued to photograph models all the way up to his death, while simultaneously suffering from renal failure. He truly shaped the landscape for gay pride as it stands today and emphasized that it is imperative that one follows their passions in life. Today, his work continues to represent the gay liberation movement proudly and is on display in the Museum of Contemporary Art, which is located in Los Angeles, and the Museum of Modern Art, which is located in New York. The Bob Mizer Foundation continues to preserve his legacy, by working diligently to share his photographs, camera equipment, camera sets and props with people now and generations in the future.