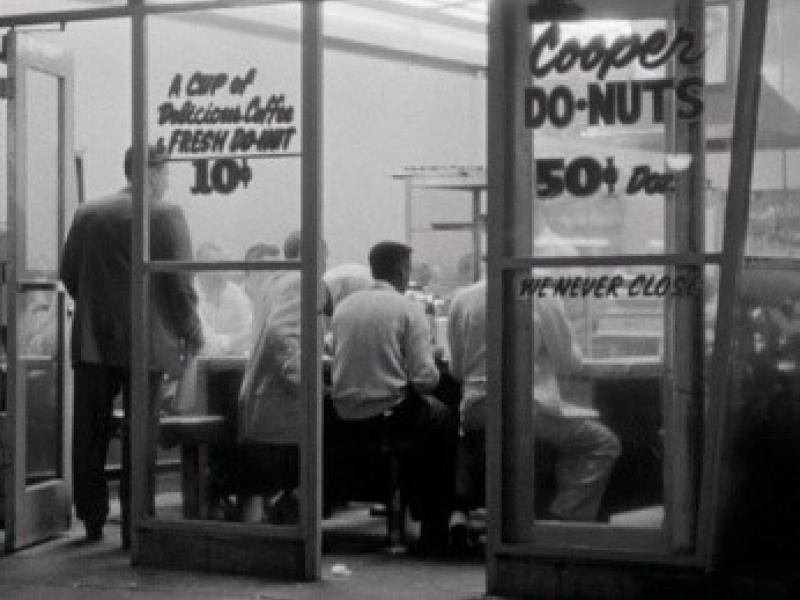 Abstract
Predating the Stonewall Riots by ten years, Cooper Do-nuts was the site of a 1959 protest against the LAPD's harrassment of the gay and transgender clientele frequenting the shop. Due to Cooper Do-nuts' proximity to several gay and lesbian establishments, a case of resisting arrest evolved into a full-scale riot that is remembered as the first open act of LGBTQ resistance toward police abuse in the United States.
Content

Cooper Do-nuts (also known as Cooper's Do-nuts) was a 24-hour café popular with the gay, lesbian, and transgender community that frequented the gay and lesbian bars surrounding the establishment in Los Angeles' Skid Row district, a "gay ghetto" of the 1950s and 60s. Many sources claim the location to have been at 547 S Main Street, but the Los Angeles Almanac argues that the true location would have been a few blocks east at 316 E 5th Street due to city directories placing the Cooper Do-nuts location closest to Main Street at that address.

Cooper Do-nuts was notably one of the few establishments in the Los Angeles area to welcome transgender patrons, as many gay and lesbian bars were wary of the LAPD's targeting and persecution of transgender and gender non-conforming citizens and turned them away for fear of being arrested themselves. Regardless, Cooper Do-nuts became a popular hangout for the LGBTQ community as a whole, largely thanks to its location sandwiched between two gay bars, Harold's and The Waldorf.

Under the leadership of chief William H. Parker, who took over in 1950, LAPD arrests for homosexuality increased by more than 85%. A routine form of harrassment included demanding to see the identifications of patrons in known and rumored LGBTQ hangouts. If their outward presentation didn't match the gender on their ID, they would be arrested under the pretense of "sex perversion." Such a form of harrassment occured at Cooper Do-nuts one night in May 1959 — according to author John Rechy, who was present in the café that night and provides one of the only original accounts of the incident in his 1963 novel City of Night, two cops entered Cooper Do-nuts and singled out five individuals. Rechy describes this form of arrest: "They interrogate you, fingerprint you without booking you: an illegal L.A. cop-tactic to scare you from hanging around."

The five patrons — two drag queens, two male sex workers, and one gay man — were led outside to be arrested following the ID checks, and when the officers attempted to shove all five into the same police car, one of the men began to protest being crammed into the packed car. His protest spurred the crowd of onlooking fellow patrons into action, and together a group of lesbians, transgender women, drag queens, and gay men rushed into the streets and began to pelt the officers with donuts, paper plates, coffee cups, and anything else they could get their hands on. The cops fled to call for reinforcements without making the arrests, and the LGBTQ crowd present celebrated the victory and vented their frustrations at yet another intrusion upon their rights. As Rechy puts it, "...the street was bustling with disobedience. Gay people danced about the cars."

By the time the police returned with reinforcements, the crowd of demonstrators had grown thanks to word of the resistance act spreading down the blocks to Main Street where a number of LGBTQ-friendly bars resided. The reinforcements were ordered to contain the "riot" and closed off a section of Main Street for the remainder of the night, making several arrests. John Rechy was slated for arrest, but managed to escape. Despite police eventually managing to wrestle back control over the area, the Cooper Do-nuts uprising is remembered as the first instance of LGBTQ rebellion against police abuse in the United States, and was subsequently followed by more well-known events such as the Black Cat Tavern protest of 1967 and the Stonewall Inn riots of 1969.

Zonkel, Phillip. “Queer History Was Made at Cooper’s Donuts in Los Angeles.” Q Voice News, 3 May 2018